Multi-Grammy Award winning superstar Lionel Richie has sold out the Covelli Centre. He will headline the first Southwoods “Concert for the Valley” on August 27 at the Covelli Centre. For one night only, Lionel Richie will appear in Youngstown for his only scheduled 2016 U.S. appearance outside of his Las Vegas residency. Produced by Eric Ryan Productions, tickets for the concert went on sale just under a month ago.

“We have been working on this concept for quite some time and it will be another historic night for downtown Youngstown. The only thing better than a sold out Lionel Richie concert, is the knowledge that Youngstown, OH will be the only North American tour date besides his Vegas residency,” Eric Ryan, Executive Director of Covelli Centre and President of Eric Ryan Productions said. “The privilege we feel for having Lionel Richie is only matched to the pride we feel for our partnership with Southwoods Health on such an amazing event for our community.”

Southwoods’ Concert for the Valley was created to celebrate the 20th Anniversary of The Surgical Hospital at Southwoods.  Ed Muransky, President and CEO of The Muransky Companies and Southwoods Health, sees the concert as giving back to the community in many ways, including bringing exciting, big name artists to the Mahoning Valley.

As part of the 20th anniversary celebration, Chris and Ed Muransky and The Muransky Companies will be contributing to the Youngstown State University Foundation dedicated to healthcare initiatives, and to the United Way of the Mahoning Valley for children’s programs. “This concert is a way for Southwoods, as well as Chris and I, to give back to a community that has given us so much over the last 20 years.  So much of what we’ve been able to achieve is because of the patients and families who have entrusted Southwoods to serve their healthcare needs, as well as the physicians, nurses and staff who deliver compassionate, world class care every day at Southwoods facilities,” Muransky said.

Plans are in place to continue and expand the Southwoods Concert for the Valley in future years to benefit the greater Youngstown area.  YSU President Jim Tressel has been working closely with Eric Ryan and Muransky to consider hosting future acts at Stambaugh Stadium, located on YSU’s campus.

Lionel Richie’s story comes to life in his songs. Honest lyrics, a willingness to defy categorization and break boundaries, and that immortal voice solidified him as an international superstar, but his legacy goes far beyond music.

However, his story remains timeless from The Commodores to his ten-album solo catalog. It’s what attracts fans to see him en masse everywhere from his 2013-2015 tour All The Hits, All Night Long to festivals such as Bonnaroo, Life Is Beautiful, and Glastonbury, which enjoyed its biggest crowd in history during his 2015 headline set. It’s also why the younger generation continues to turn to him. Whether its country’s modern vanguard clamoring to collaborate on 2012’s Tuskegee or Christina Aguilera and Pharrell both requesting him as a guest mentor on NBC’s The Voice, Lionel Richie’s soul circles throughout popular culture.

It all comes back to relaying that story though. “I don’t consider myself a singer as much as I do a storyteller,” he says. “That’s how you connect.” — Rick Florino, July 2015

The Surgical Hospital at Southwoods is an acute care hospital in Boardman, Ohio that is proudly owned by local physicians and the Muransky Family.  Renowned for providing a superior patient experience and consistently ranking at the top of national patient satisfaction and quality of care surveys, Southwoods continues to expand its scope of services, which  includes inpatient, outpatient, pediatric and robotic surgery as well as endoscopy and pain management services.  Southwoods also provides an expanding array of ancillary health services at locations separate from the hospital campus — all of which are designed and operated to meet Southwoods’ high quality clinical standards. These locations include Southwoods Imaging, the most technologically advanced imaging center in the region, as well as Southwoods Centers for Sleep in Boardman and Austintown and multiple locations of Southwoods’ physician offices throughout the Valley

To learn more about the Surgical Hospital at Southwoods, please visit http://www.southwoodshealth.com

Eric Ryan, JAC’s founder and CEO, was introduced into the entertainment industry in the late 1990’s. He had humble beginnings and started promoting shows in a club that he and his wife (April Ryan) owned, in their hometown of Struthers, Ohio. The booking of local and regional acts quickly grew to promoting events outside of the club. In 2002, Eric Ryan Productions was born which became the catalyst for larger opportunities. Over the next 5 years Eric Ryan Productions promoted/ produced over 250 concerts with over hundreds of thousands of people in attendance.

In the fall of 2007, Eric Ryan Productions was approached by the City of Youngstown to operate the city-owned 48 million dollar 6,000 seat multi-purpose arena, the Covelli Centre (formerly the Chevrolet Centre). At that time, the 3 year old arena proved to be a major hindrance for the city with a yearly operating loss of over a half million dollars.  In addition, the debt service on the building was costing the city over $1.2 million per year. The city hired Ryan’s JAC Management Group to take over management of the arena on an interim basis while they went through a RFP process soliciting major national management companies. JAC quickly caught the attention of city officials by booking major artists and events as well as slashing operating budgets and operational spending by efficiently operating the facility. The interim basis became permanent as of June 2008 when the city hired JAC as the permanent management company to oversee all operations.

2009 marked JAC’s first official year at the centre with an astounding turnaround of over a million dollars to the City of Youngstown. During the first year, JAC accomplished many feats including signing a new naming rights partner, Covelli Enterprises (owner and operator of over 200 Panera Breads across the country), negotiating a lucrative Ticketmaster agreement, implementing a 5.5% admissions tax to assist with payment of the city’s debt service, increasing sponsorship and arena partnerships by 20%, and successfully implementing building preventative maintenance contracts. Not only had JAC propelled the Covelli Centre to its first operational profit while maintaining and managing a $5 million+ budget, we had also successfully managed/operated the Covelli Centre to three consecutive years of operational profits.

JAC’s unique arena management business model has revolutionized the traditional arena management model. The foundation of this concept is our ability to not only manage facilities, but our ability to promote shows within those facilities through our subsidiary company, Eric Ryan Productions. JAC Management Group prides itself in “putting its money where its mouth is” by promoting/producing many of its own events and programming that increases the attractiveness and probability of your facility. JAC is a multi-faceted company managing all aspects of the arena including but not limited to arena operations/staffing, booking, building/ice maintenance, finance, marketing/corporate sales, and food & beverage operations.

JAC Management Group is poised to expand into other markets that are dually beneficial for both JAC and arena ownership. 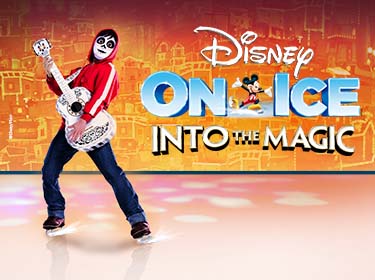 DISNEY ON ICE PRESENTS INTO THE MAGIC